Stories from the past.. 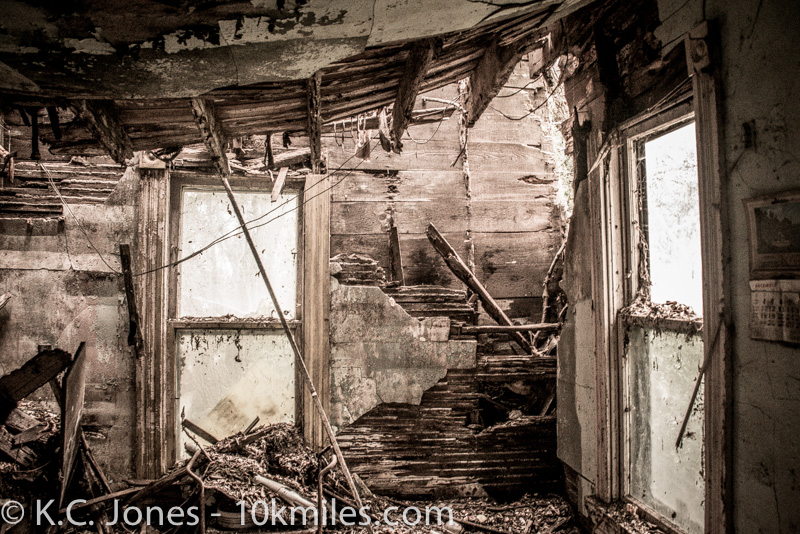 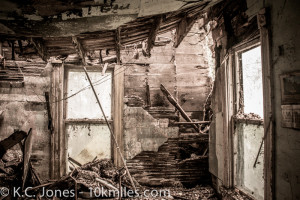 The calendar on the wall was open to December, 1967. The furniture and clothing fit the part. An old wool pea coat hanging in the weatherbeaten stairway along with other jackets and clothing. Shoes in the bedroom amidst piles of personal effects strewn everywhere. Makeup, perfume bottles.. a woman definitely was one of the last occupants. A black and white photo of a woman on a bicycle. Is this her? A daughter maybe? It’s not the same bicycle as the one leaning against the shed. That one has a different frame. I’m sure that at one point, this house stood as a source of pride. Now, the tree branches are applying pressure to the roof. The trees are gaining ground. The roof has already given in part way. Small cards are strewn in the bedroom. They all have the same name on them. The last name is the same as the mail and canceled checks from the 60’s… Were they graduation announcements for her son? Perhaps they were for a funeral instead? 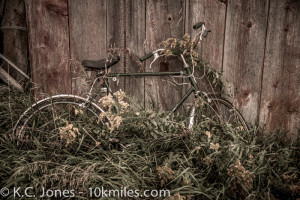 The musty smell of disuse, dirt, and dampness fill the air. An old TV sits in the living room with it’s sheet of green glass still intact in front of the tube that once provided hours of entertainment. An old Majestic record player sits in the hallway. It has fared much worse than the old TV. Its cabinet in ruin and barely holding itself together. How many dances were had with this record player. How much emotion was released into this room? 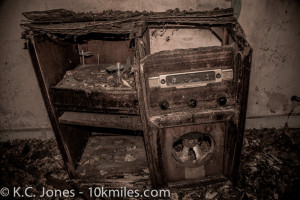 A suitcase of books lay open on the bed. Rain and snow falling through the gaps where the roof used to be for countless years have left them in such ruin that only a few titles could be read, including Treasure Island.

Thunder was rolling in the distance. Rain started pattering on the roof, well, what was left of it anyway..

While going through these abandoned buildings, I can’t help but think of the lives of the people who lived here before. I guess it’s all those years studying Anthropology kicking back in. I look at everything around me and try to piece back together the stories that once lived here. It’s not all that different from looking at the evidence found in an Archaeological dig. Instead of digging through the dirt, I look at the modern artifacts. Most strewn around the place either by looters or family members searching for valuables after their passing. Items that are seen as having no value are left behind. Some of these items only held sentimental value to the previous occupant.

One thing stands clear in my mind. All this stuff is just stuff. You can’t take any of it with you. What matters are the experiences that you have, the people you touch in your daily lives, and the people that you love.