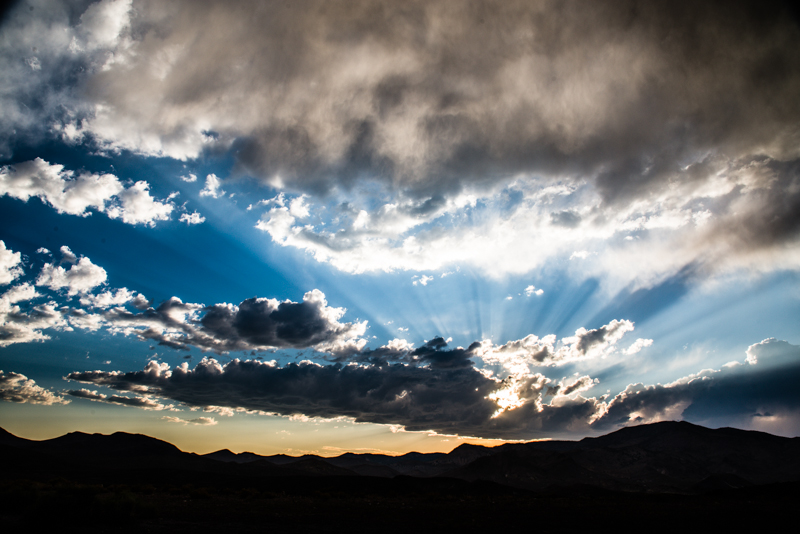 “Never stop for strangers on the road!” That is often what you hear from people, and I was told that by many people before heading out on this trip… But that’s just not who I am, nor who I want to be!

I was driving down the road in Nevada, and had not passed a car for miles! I had jotted down the numbers of the back roads that I was going to take since I didn’t want to use Interstates. One truck finally passed by, and then about 5 more miles down the road, I see a car with the hood up and a guy start walking the direction that I just came from. He looked at me and didn’t make any gesture suggesting he wanted me to stop.

I know that it’s about 13 miles to the last town that I went by.

I look to my left and see the sun hidden in the clouds. Beautiful rays peeking through… 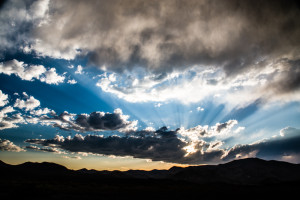 I pull over. I’ve gone about three miles past the guy stranded in the desert. I keep thinking about the “Good Samaritan” in the bible. And how we are called to love each other as we love ourselves. Would I want someone to stop for me? You bet! It was going to be dark soon, and I still hadn’t had another car pass me. I said a prayer and asked God if I should turn around and offer help. Just then, a light sprinkle came from the heavens pattering on my windshield. Rain. In the desert.

I asked God to protect me. I cleared off my passenger seat and turned around. Right as I was turning onto the road, a truck passed by going in the direction of the stranded man. I told myself that if he stopped and offered assistance, I was good. I followed him, he slowed down for the man and then kept going. So I rolled down my window and offered assistance.

“Didn’t you go by a few minutes ago?” he asked. “yes, but i turned around when I didn’t see any cars pass going the other direction. I didn’t want you to be stranded and night will fall soon.”

He had just bought the car that day, and it had not been run in about 5 years. He had to take his mother to the hospital because she was having difficulty breathing. He forgot to check the radiator before leaving and it was dry. All he needed was some water and he would be able to be on his way.

When I packed my car, I had a gallon jug that my dad refilled for me with nice, clean water, in case of emergency. I had exactly what this man needed. I gave him the gallon, he filled his radiator he thanked me and was on his way.

I got back in my car and continued down the road. I looked to where the sun had been hiding, and there it was in full glory shining on me like a smile from heaven. I just burst into tears! God was smiling down on me for doing the right thing! 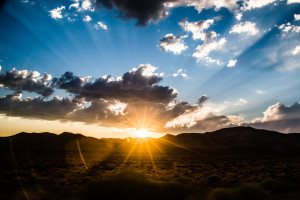